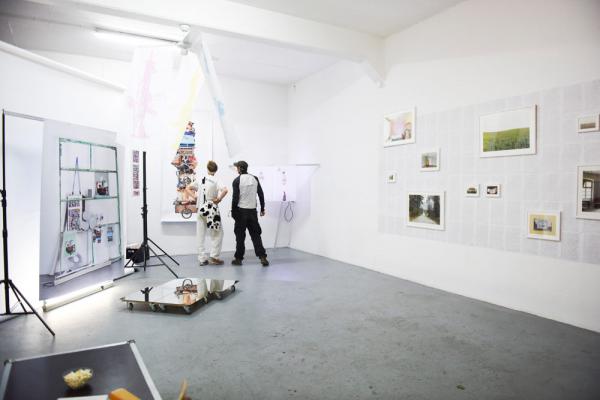 On September 17 and 18, 2016, the Künstlerhaus Bremen presented itself as a place for art production and presentation in the best weather with the days of the open studios Hausbesuch 2016.
More than 22 artists at Künstlerhaus Bremen opened their studios to the public during the 2016 house call. Other members, such as the associations BBK Bremen and the Künstlerinnenverband Bremen, GEDOK, were available to answer questions from the interested public.

On three guided tours of the studios, the guests were able to gain an in-depth insight into the various working methods and fields of the visual arts. On Saturday evening the audience also experienced two very different performances in the inner courtyard. Markus Wustmann and Branka Colic showed as Colić Kolektif their first joint performance ,ANGST - Eine Bushaltestelle ist kein Jugendklub;. The duo works with the image of a bus stop as a location for events. A performance with sound, language, text, fashion and music. Afterwards, the two artists Norman Neumann and Gustavo Méndez Lopez presented the live act ,Project ORDER, the facade of the Künstlerhaus served as a projection screen on the theme of sound and image.

The Künstlerhaus Bremen thanks all actors and helpers who made this successful weekend possible through their commitment. Special thanks go to the speakers who kindly took over one of the guided tours through the studios.