Collecting, stacking, layering –these are the activities that determine the work of Achim Bitter (*1960 in Twistringen, lives in Bremen). His works of art evolve by putting together everyday things in often unusual ways. His edition consists of a water box with an integrated hotplate, which has obviously already been used several times. The plug of this plate winds its way to a second box, which is slightly offset forward at right angles. The centerpiece of this box and key to the arrangement is the espresso pot. Set in the middle of the box, it sits enthroned on a pedestal of wood and metal. Above it a tower of bucket and cup is built up, surrounded by a styrofoam block, cups and a sponge. The arrangement plays with randomness and spontaneity. At the same time it is a meticulously arranged and precisely balanced composition, similar to a good coffee blend. However, the buyer himself decides on the process of coffee preparation and the mixing ratio of the components.

The coffee consumption to which the edition alludes is closely linked to Germany. The basic equipment of every office includes the obligatory coffee machine. Thus, it is impossible to imagine the artist’s workplace, the studio, without it. And even the traveler arriving at Bremen’s main train station cannot escape. He is greeted by the well-known, oversized logo of coffee producer Jacobs. The visit to Bremen thus begins with the ”Krönung” and sometimes continues to the Künstlerhaus for Achim Bitter’s edition, an ode to coffee culture. 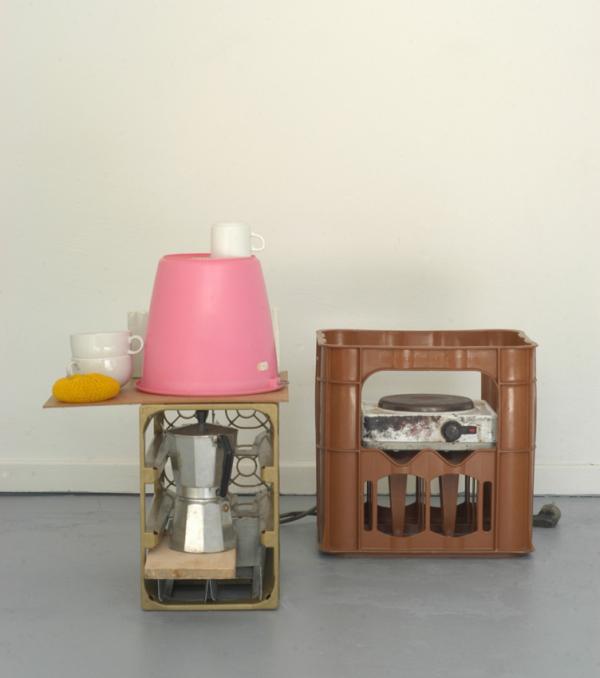