A face appears inconspicuously for a brief moment in front of the camera: a breeze and glistening light. Surrounded by a muffled noise, one waits eagerly for the appearance behind the diminishing oval of light, which resembles an alien solar system. The noise ebbs away, a rhythmic ticking begins. Accompanied by a suspenseful, ominous sound, a blinding light source emerges from the darkness. Little by little the light disappears and an unreal scenery becomes visible, illuminated by a row of light bulbs above which a bluish writing is enthroned: WORLD. The sounds of the street and the footsteps quickly disappearing allow the viewer to find his way back into his own world.

The ambivalence of light and darkness, the contrast between “seductive light” and “black nothing”, the irritation of our everyday habits of perception run through the work of the artist Astrid Nippoldt (*1973 in Gießen, lives in Bremen). In her drawings and video installations she takes up real, well-known scenes, places and sounds and abducts the viewer in seemingly unknown worlds. The combination of unusual light situations, continuous movement and matching sounds often leaves behind only a vague idea of the familiar and at the same time always implies the intensive experience of one’s own perception. 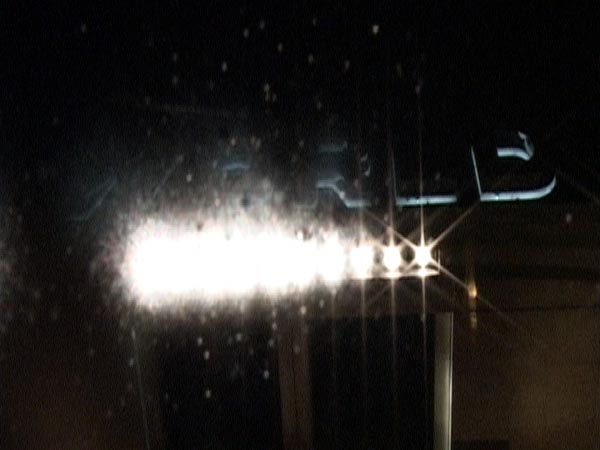