Parts of a narrative printed in black on simple white mugs. As usual, one reaches for the handle and guides the cup to the face to read what is written there or to use the cup for drinking. But you are denied both at the same time, because the small print, which sometimes has one or more paragraphs and is only on one side of the cup, is upside down.

As in previous works, Jonathan Monk (*1969 in Leicester/GB, lives in Berlin) also makes reference in this work to a conceptual artist of the 60s and 70s: Bas Jan Ader. He takes up his image of the artist and utopia in a manner that is both serious and humorous-ironic. During a performance at the Kabinett für aktuelle Kunst in Bremerhaven in 1972, Bas Jan Ader read from the adventure story The Boy who fell over the Niagara Falls, which is now on Jonathan Monk’s 24 cups. The artist as narrator, at the same time the relation of the story to his self-conception as an adventurer and the act of falling were the main themes of Ader’s work. Jonathan Monk also refers to these three aspects with humorous hints and in his own new way. He leaves only a fragment of the story to the user of a single cup, and whoever, before emptying his cup, is curious to read what is written there, will experience an adventure himself, will become a Mug. 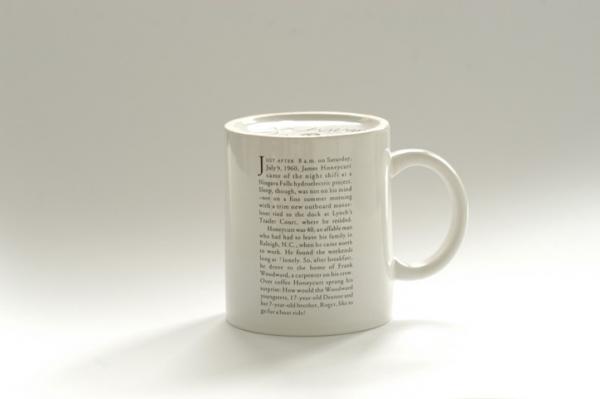