The painter’s own studio is probably the space he knows best. He spends days and nights in it. Everyone who has ever entered a painter's studio knows this peculiar atmosphere, soaked by the smell of oil paint, the intrusion into an intimate working situation, the many paintings and sketches standing around and lying around, most of them still unfinished. The three drawings by Matthias Weischer (*1973 in Elte, lives in Leipzig) do not depict light-flooded, open studios, as one might expect, but dark rooms shielded from the outside world. Paintings hang on the walls and lie around the room. A trombone floats to the ground. Chinese vases are lined up on a heavy wooden cabinet.

The multi-layered brown ground of the paintings, the heavy, dense curtains and the dark wooden furniture stand in striking contrast to the paintings scattered around the room. These seem like stereotypes of abstract painting. The three depicted rooms are dominated by an easel with a canvas on it. A fist shines combative. The socialist greeting is stylized to the short formula of an utopia. Atmospheric set pieces appear as elements of a caricature. One of the three works shows a figure, the painter, scratched into the ground of the drawing. Torn between the epochs, it oscillates in grotesque distortion between a fool and a magician. 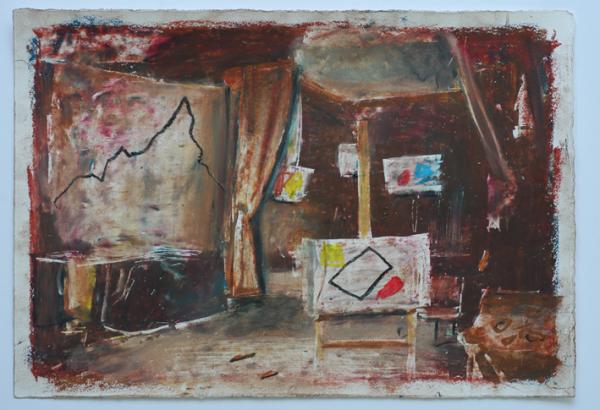