Martina Sauter (*1974 in Konstanz, lives in Düsseldorf) connects stills and photographs in her works. Like a collage, she combines stills from film classics with her own photographic views of space, whereby the image fragments are combined in such a way that the impression of a uniform spatial structure is created. In this way, she generates a completely new story out of two previously independent pictorial worlds, even though the image carriers are placed on top of each other in relief, i.e. kept at a distance. This, however, only reveals itself on closer inspection of the works. The synthesis of both image carriers also reveals the heterogeneity of the media used: the sharp photographs contrast with the slightly blurred stills photographed from the television screen. In Martina Sauter’s edition Tischkante, the cut runs horizontally, creating a fictional spatial situation. However, this space is articulated exclusively by means of color surfaces, some of which show no perspective development whatsoever. The motif is thus divided into abstract colored surfaces that oscillate between two- and three-dimensionality. 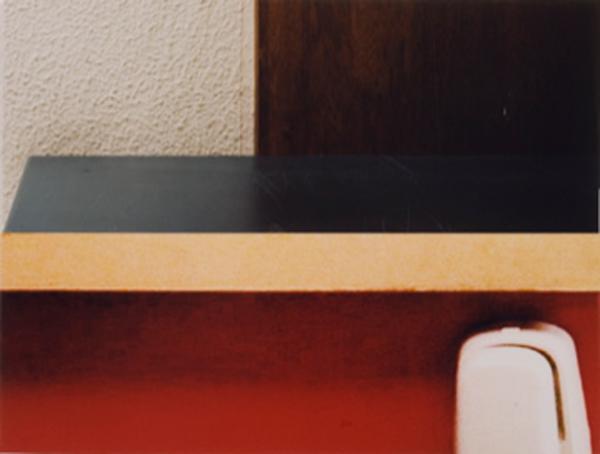