The works of Preechaya Siripanich (*1973 in Saraburi, lives in Bremen) are foreign bodies in a familiar world. The Thai artist captures objects, materials, and pictures known to us in bizarre constellations, arranges them in new contexts. This is also true of his work Bettlerjagd (2008), which is already odd because of its title. A paper falcon, figure of the sun and the light, on a black container– on closer inspection it turns out that the bird is not sitting but hooked on the replica of a box for fried noodles, which one comes across at every Asian take-away. The creature meets a civilizing fragment, nature and city collide. The title and the 1-Euro coin embedded in the bottom of the box open up an additional reading: The wonders of civilization have a flip side, they are Janus-faced and thus ambiguous in their function. The familiar is transformed into something strange, which transports a deep sense of being uprooted. 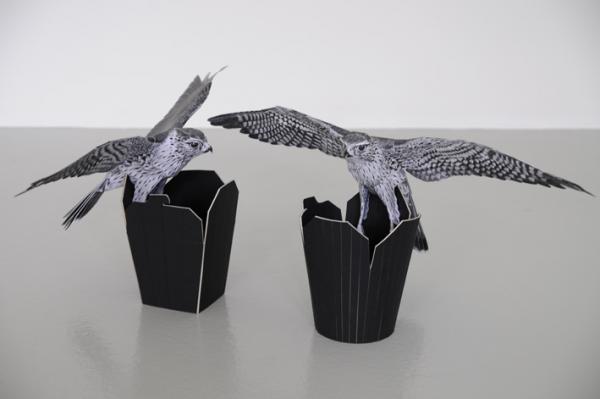