Since 2009 Kateřina Šedá (*1977 in Brno / CZ) has been dealing with the events in the small Czech town of Nošovice. A few years ago, a huge Hyundai factory was opened there: an architectural foreign body that influenced the entire village structure. From this discovery Kateřina Šedá started to initiate a discussion among the inhabitants of Nošovice about how to deal with the given situation. With the intention of positively reevaluating the negatively occupied village, Šedá had created cloth ceilings with a hole in the middle. The inhabitants of Nošovice were to climb into this hole– the site of the Hyundai factory– and draw what surrounds them. The villagers’ drawings were reworked by embroiderers. In this way, several hundred unique tablecloths were created, which captured the topography around the factory and were in turn redesigned into new pieces for other functional contexts, e.g. skirts for the women in Nošovice. In one piece of clothing, all the previous stages of this long-term project are thus combined, and as Nošovice Costume, the pattern circles the globe. 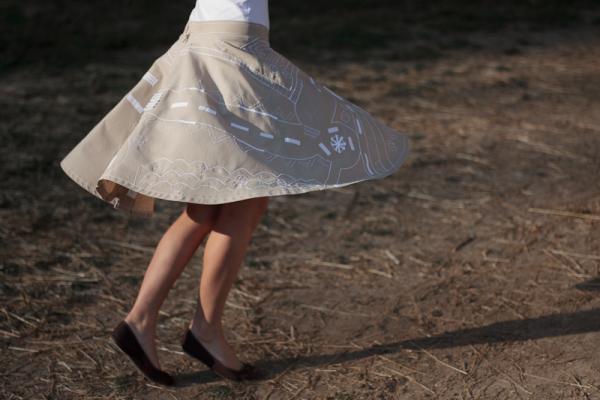