Tim Etchell's (*1962 in Sheffield / UK) oeuvre is diverse: he works in the fields of photography, video, installation, performance and is the author of numerous books. In playing with the genres, he circles around social codices that manifest themselves, for example, in language or time. These phenomena are essential for our society, but are difficult to grasp and highly volatile. Tim Etchells addresses time in his photo series of stopped clocks, including Stopped Clock (Phnom Penh), which he discovered at the airport in Phnom Penh. The clearly structured photograph consists entirely of geometric shapes and creates a noble atmosphere with its warm bronze-like hue. Lamps, vents, ceiling coverings, which can only be identified as such at second glance, combine to create a very special aesthetic. The clock with its inscription ‘under repair’ occupies a central position. The flow of time is stopped and the clock is robbed of its actual purpose. An insane thought that time could be ‘under repair’, opening up fantastic perspectives. 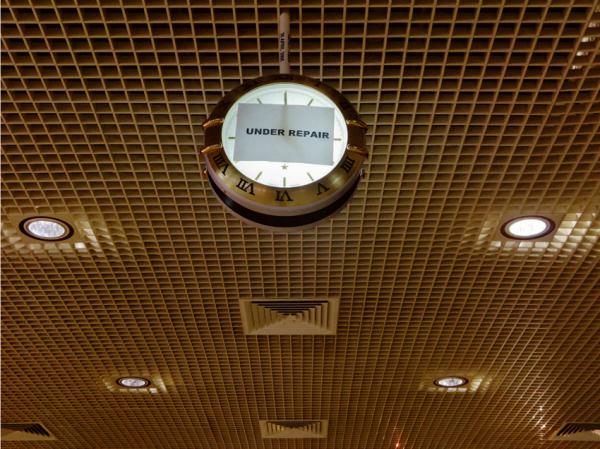