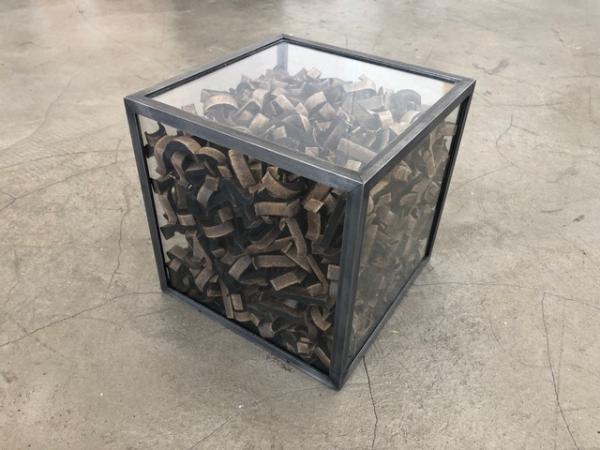 The sculpture Sea Sick Passenger Letterbox (2016) is linked to the formal language and concerns of its predecessor Sea Sick Passenger (2014), a large 'screen' made of felt presenting a cut-out text lying on the floor. While the text on the felt screen is only readable in parts by looking down as you walk around it, Sea Sick Passenger Letterbox compresses the actual cut-out felt letters in a sealed glass container – similar to a blackbox its content is encrypted, yet seemingly accessible through the transparent glass. Language is decomposed in this bottled message, a translation of sorts, opening up to new possible meanings. As Ben Borthwick put it, “The reader becomes the editor, sequencing these fragments into new narratives.”

Rosa Barba (*1972 in Italy, lives in Berlin) is an artist and filmmaker. She combines film, sculpture, installation, live performance, and text, all of which refer to the material and conceptual qualities of cinema. In installations and site-specific interventions, Barba analyses the way film articulates space by placing the work and the viewer in a new relationship. Questions of composition, physicality, form and plasticity play an important role in the perception of her work. She explores different forms of staging by inviting the viewer to participate in her cultural observations. This is done by shifting gestures, genres, information and documents, which Barba often detaches from their usual context, redesigning and presenting them in a new way.