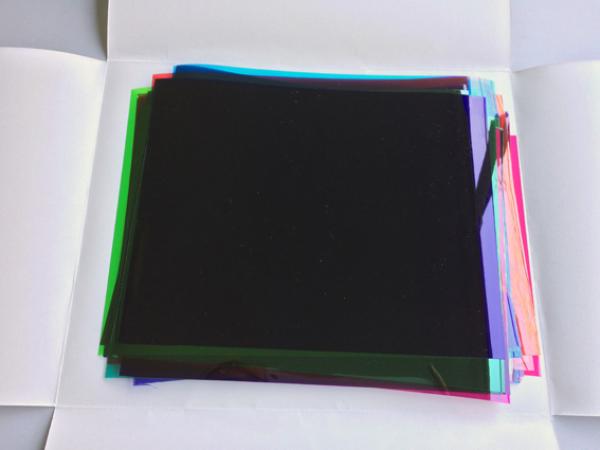 The American artist Margaret Honda (*1961 in San Diego, lives and works in Los Angeles) realized her first solo exhibition in Germany in 2016 with An Answer to ‘Sculptures’. Since the 1960s, she has been developing a body of work that is sculptural in nature, regardless of the medium chosen. At Künstlerhaus Bremen the artist showed a new, time-based work titled Film (Künstlerhaus Bremen), which changed several times over the course of the exhibition. The entire range of E-Colour+ light filters from the Rosco company, which are commonly used in the film industry, was distributed over six reels or "film rolls". Attached to the window panes of the Künstlerhaus, colored films formed the basis for six different exhibition sequences.

For her edition, Margaret Honda assembled the trims, the remaining film remnants into individual portfolios that correspond to the respective reels for Film (Künstlerhaus Bremen). In film production, trims are material remnants cut out of the film strip during montage. Even if they are considered unnecessary at first, they are kept so that they can be used at a later date.